Posted on November 1, 2013 by parrot feather 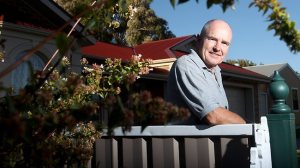 I was listening to Life Matters on the radio on 25 October and heard the start of a talkback on neighbours. They had an interview at the start of the program with a guy,  John Elliot (pictured above), who has won an award as Adelaide’s best neighbour. He was a treat to listen to – very unassuming and straightforward in his manner, a bloke who obviously really enjoys keeping active and helping others in a really practical way. He takes the neighbours bins out, he mows the nature strip, he changes light bulbs, fixes washers, chops wood, paints houses, anything that folk need, he is there.
A few things struck me about what he said:

These kinds of quiet activities make a big difference to the quality of community life. They provide a strong underpinning of security for people, they weave the social fabric, so to speak.
I was talking to some folk yesterday who told me that they had had a cat bring her kittens and leave them under their front decking. They are older folk and called the RSPCA to help in rescuing the kittens, and also ended up having a pow wow with their neighbours about the mother cat and how to catch her. They felt good that the kittens were on the way to hopefully a better life, and they had connected with neighbours and other supports to get things sorted. These kinds of interactions make a difference to our lives in little tiny ways, and we do so much better if we cultivate them.

This entry was posted in Uncategorized. Bookmark the permalink.