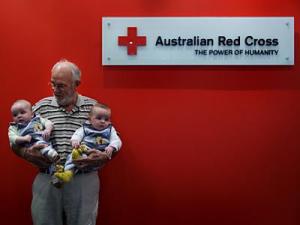 I heard an interview on the radio last week with a man who has been giving blood since 1954. He has donated around 1100 times, a rate of about once every 3 weeks for 60 years. He has apparently never missed an appointment in all that time. What’s more, it turns out he has a rare blood type that has helped millions of people who have rhesus disease (which comes about if the Rh factor in the blood of a pregnant mother is different to that of her baby, and can cause death or disability to the baby). The man, James Harrison, decided to give blood after he had received many litres of blood as a teenager needing major surgery himself. I will put a link to the radio interview and article about him here.

It is fantastic, and a wonderful example of generosity, commitment, dedication and the unassuming contributions that make such a difference in daily life. I also think about the people who gave their blood to him back when he was 14 and having his chest operated on. We have no idea who they were, but without them perhaps he would not have had the urge or even been able to donate – and the many people who have benefited from his blood (and in particular his special plasma) would have been in a more precarious position.