I have spent a good deal of the last two weeks in Auburn. Dad has been unwell and I have been there with him. He has had a few days in hospital, and even after he got home again, has taken a little while to get his mojo back. It is a reminder of how fortunate we have been that he is generally so well, and also that nothing lasts forever. Anyway he is improving now, and has just spent an enjoyable day watching the football.

Being in the country, even in these circumstances, has its consolations though. I have been struck two quite different aspects of country life. Firstly the immensity and beauty of the night sky. Without the light pollution that dulls the heavens in the city, the Milky Way flows brightly across the sky, the Southern Cross is very evident, and some old favourite constellations show up clearly where I can never seem to find them at Glenelg – in particular I have become reacquainted with Corvus the Crow. This little group of four main stars really does remind me of a bird flying towards the western horizon, and each night, when I am out for a walk here I can look at it gliding across the sky, along with all the other stars that gleam out. I find it very soothing and awe-inspiring – the hugeness dwarfing any worries and putting them in perspective. 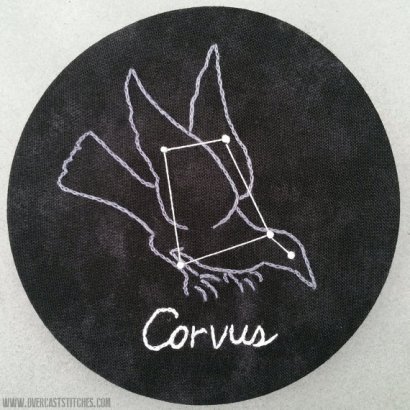 It’s pretty impossible for me to get a photo of the sky, so these images from the net will have to suffice… 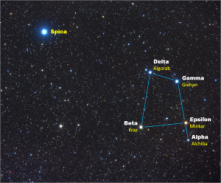 Here is another one from the internet 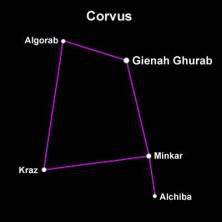 And a final look at the constellation and its stars

At the other end of the scale are the chooks. Dad has 20 of them now, and I have been feeding them morning and evening, and collecting the eggs. They are real characters, amusing and admirable as they run around the yard doing their chooky business, living the lives of hens, untroubled by psychology or the past or the future. They are very present, and very entertaining. One brown one has a habit of escaping from the yard – she poos in the carport which is a bit annoying, so it is a little ritual to get her back out with the other girls. I discovered the other day that she has been laying her eggs in the most inaccessible spot imaginable – another reason for her escape I think is to get to this area. I spent some time getting to the nest when I worked out where she was, and emerged with four eggs and filthy clothes afterwards (see below photos for a snap of where the nest is). 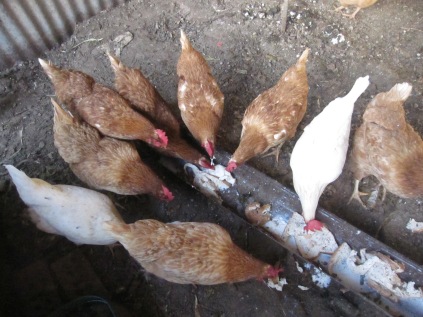 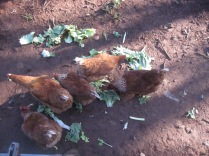 Feeding greenery to some of the chooks 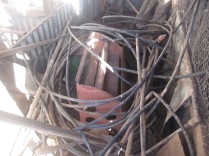 This is where the hen laid her eggs – behind this lot! 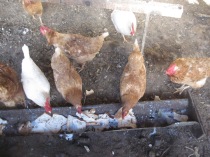 Morning feed – old bread soaked in out of date milk! 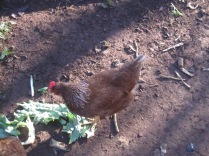 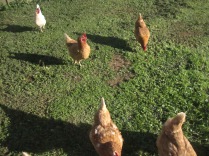 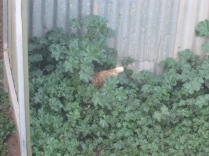 A hen going into hiding amid the marshmallow weeds 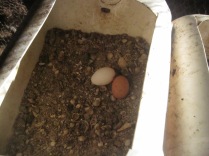 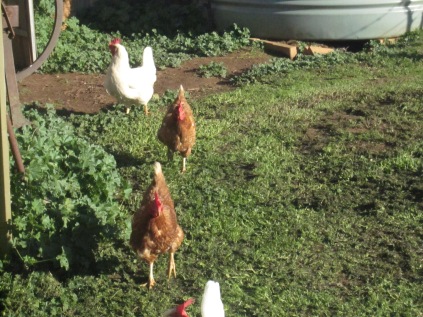 Out in the paddock 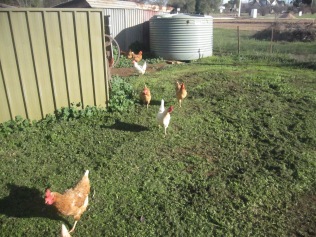 Chooks following us in the newly mown paddock 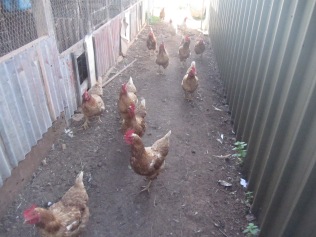 Chooks running in from the paddock

2 Responses to Immensity and smallness