Panel of speakers at WW. Note the plants in the background screen grown by Trees for Life Vols

More mist at the Museum

Leaves and trees at WW

Leaves above me at WW 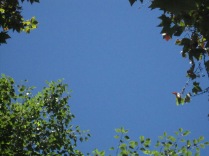 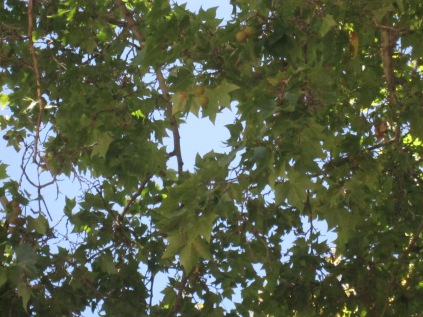 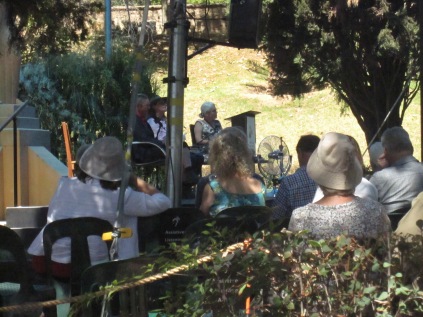 Another angle at WW 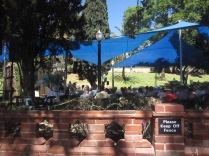 Shadow of a palm tree

Heart shaped gap between the trees

I have been to various Festival events this past week, and have been struck by the  various ways that ‘ordinary’ people, who don’t earn a living from artistic or creative activities, have played a big part in what’s been going on – as volunteers, helpers of various sorts, but as performers too.

At Writers’ Week, there are heaps of volunteers showing the way, staffing the book tent entrance and the Trees for Life people who have made the beautiful backdrops and welcome arches over the past few years. My cousin Heather is one of these Festival Volunteers at WW – she does it most years.

She was also one of the local people who was part of the Lost and Found Orchestra – ‘playing’ a plastic bag she tells me. Other folk – including Paul, who owns the flat below me – were also part of the performance, banging, flapping, stroking and whirling the various improvised instruments that were created out of stuff that would normally be thrown away – things like the aforementioned plastic bags plus lids, pipes, milk bottles, sticks and more. There were hundreds of ‘extras’ and I loved it – seeing so many people being part of a big show in front of lots of people.

Then later in the week I went to a stunning show at the Playhouse – a performance of Alice Oswald’s poem Memorial, which has been transformed into a theatre piece by a local company. Helen Morse performed the poem alongside a wonderful musical ensemble of players and singers in a small orchestra, some professional dancers, and 215 Adelaide folk, representing each of the people who died in Homer’s Illiad, and on whom this poem is based. They sang in unison, and performed various collective actions to moving and marvellous effect throughout the piece. A few folk I know, including Megan and Marg, were part of the show, and I know they have rehearsed the various songs and choruses for months. It was incredibly poignant to see the long lines of people moving across the stage in various ways – different ages, sizes, abilities and colours – representing the lost lives of so many ordinary folk in war and unnecessary death, made more striking by their actual ordinariness – it was as if I was seeing myself and my dad and his friends who died in war all up there. There is an image at the end of the poem (and the performance) of the dead being like leaves from so many trees blowing in the wind, and asking who could write a history of leaves:

The impossibility of grasping the reality of all these people, but the beauty of trying to. I found it just marvellous – and knowing some of the performers was part of that.

This links in a serendipitous way to another connection with Adelaide folk who are part of the Festival. On Monday I took a break from Writers’ Week to investigate the show 21: Memories of growing up. This is a video piece where the artist has interviewed lots of people of various ages and from heaps of different places about what they were doing when they were 21, and then videoed them listening back a few months later to what they said. Megan H and I went together. There were many different small video screens to look at, each of them playing a small group of interviews one after the other. We chose a screen at random, and ended up listening to three or four interviews with people who turned 21 in the 1990’s. The first one was particularly emotional – a lovely woman who had been in Italy when she was 21, and struggling with an eating disorder. She said in the piece that she eventually came to Australia and had obviously made many changes in her life. As we left to go after seeing a few more stories, one of the volunteers at the venue asked us how we had gone – and by chance it was this very woman. We spoke with her for a while (it was a thrill and she told us a bit more about how it came about that she was part of the show), and she told us that she was going to be part of the Memorial performance too, on the night I went as it turned out (Tuesday), as one of the 215, and with the task of carrying water to Helen Morse at one point in the show. And so I saw her there too.

The links and weaving together of all these local people in this big part of the Adelaide calendar, and me there too, as a regular punter, have made the whole week very special. The image of us all as leaves, just leaves, both insignificant and crucial has been with me for days now.

3 Responses to History of leaves