It’s been a big week for community events and activities. I attended Katrine Hildyard’s International Women’s Day dinner at the O’Sullivan Beach Panthers Football Club (the soccer club, not AFL), about which more anon, on Thursday night. Then last night, there was a fund raiser for Food for Freedom at the Christies Beach Football Club (the AFL footy club, not soccer this time). It was fantastic – four local live bands playing, a bus done out as a diner for food (delicious jaffles), a raffle (prizes for which included the traditional meat trays!), people and fun. The music was punky thrash and full on, and my personal highlight of the night was someone (looking pretty glamorous) telling me that they didn’t expect to see ‘someone like me’ (by which I presume she meant older middle aged social worker type still in her work clobber) (funny that I actually feel about 25 most of the time) out on the dance floor! So, you never know do you – someone whose blog commonly features autumn leaves and her old dad and various bits of worthiness can also summon her inner punk when the occasion calls for it!

But more seriously, it was a great night and marvellous to experience support from an unexpected quarter in a way. Danielle, who organised the night has been hooked into CHO for years, firstly as a TAFE student on placement I think, then running Italian classes, and as a volunteer for FFF too. She has been so supportive of the program in lots of ways over time – generous donations at various times and always talking up the program wherever she can. She is the singer in Chaos Swing, one of the bands, and screamed her heart out appropriately when they opened the night.

The bands were terrific too. I particularly liked The Mid-Riffs, who Richard tells me have been together about 20 years and who played such a tight and powerful set (imho!). Apparently one of the band members there, Jag, is a member of the CBFC too, and had to get up at dawn this morning as the coach of the under 13 side. So, you never know do you – a punk who coaches junior footy and an old social worker who’s a punk (well, sort of anyway).

Many thanks to everyone who came along and organised in any way. It was such fun. Here are some mostly pretty bad photos of the night, to give you a flavour.

Fantastic signage at the entrance to the club

One of the bands 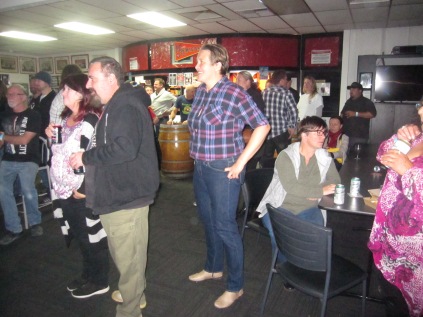 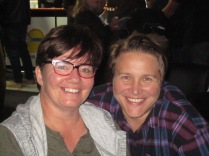 Some of the crowd

Hadn’t got the hang of the flash at this stage, but this is The Mid-Riffs in action

Danielle on the right, the instigator of the night, with the drummer from her band, whose name I don’t know

Looking towards the bar

Richard being the door man

Sal, Robyn’s partner (whose name I have temporarily forgotten) and Robyn