When I first went to uni – studying social work all those years ago, I lived for a couple of years with my aunt and uncle, at 21 Elizabeth Street Blair Athol. Auntie Joan (dad’s sister), and Uncle Leo lived there for many years after moving to Adelaide from Peterborough. Uncle Leo worked for the railways all his working life.

I have been thinking about how much social class is expressed by where we live, our streets and suburbs perhaps more so than country towns, and today I went hunting for other 21 Elizabeth Streets around Adelaide. There are lots of roads with that name, so it’s quite a good one to choose. I didn’t go everywhere of course, and I may do another swing around in the future for another post, but here are three 21’s, another E Street which was very short, and one street in the city which was long enough but didn’t have the number courtesy of most of it’s buildings facing other roads or being large blocks with businesses on them.

The first I went to was in Torrensville – it’s a street with quite a few older houses, many of which haven’t been kept up particularly well. No 21 was on a corner block and had one end of it subdivided (as 21a). I think it was may have been built in the 1940’s.

Then I went back to Blair Athol. The place looks pretty much the same as it always has. It has a small front yard and a very large (and invisible from the photo) back yard. Long before social work studies (in the ’70’s), when we were children, we (my sister Jane and I) stayed with Auntie Joan and Uncle Leo for holidays. I remembered the neighbours and their children whom we played with, and the big willow tree next door and Aunt and Uncle’s massive walnut tree. Jane would dress up in A Joan’s stilettos and at night, in bed, we could hear traffic from the Main North Road – I still have a sense of that different night-time atmosphere and being homesick for mum and dad!

The house is in a plain and unadorned street – not much in the way of beautification and a sort of view at the end of the street looking down over other houses and factories to the west – it is an unassuming house in an unassuming suburb. 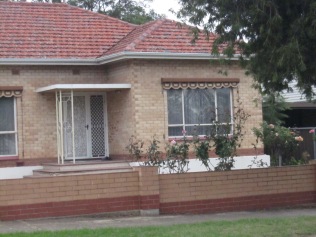 Closer up – is this a triple fronted brick veneer home do you think??

After I left Blair Athol I went across to Norwood, in the leafy east. Elizabeth St there is across The Parade from Norwood Oval, and is a very different story to the first two E Streets today. Beautiful trees all coming into their autumn colours, some quite imposing houses and some little quaint cottages. It has a much more salubrious feel to the other E streets today. Number 21 is a tiny cottage on a large block.

The cottage at 21 E St Norwood 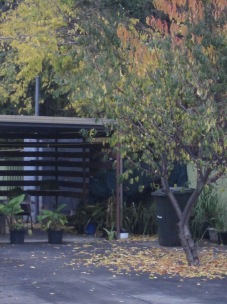 Part of the yard of the house at Norwood

After I left Norwood I went through the city to Elizabeth St there. It is a street I walk through often – it’s not far from my favourite bookshop! The whole of the block which would contain no 21 contains businesses, large car parking areas, and big fences. There is the side fence of a childcare centre, a plumbing business, and this big fence (behind which who knows) in the spot that I imagine no 21 to be.

Fence, behind which who knows what, 21-ish Elizabeth St Adelaide

Then my final street, in Glenelg, not far from home. It was dark by this time, and not much to see – more car parks, the back of shops on Jetty Road, a French patisserie which I didn’t know was there, and up ahead the back door of The Grand Hotel, which is on the beachfront. Definitely not long enough to have a 21, but it’s an Elizabeth, so it’s got a photo! 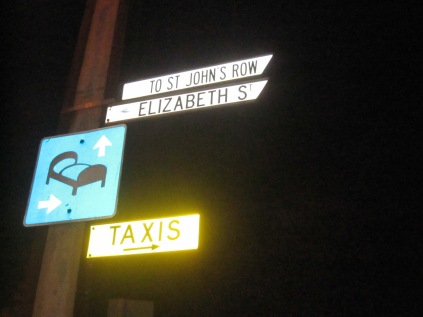 Photo looking down toward The Grand, dark by this time

(Another Elizabeth, Road this time rather than Street) is close to work and very familiar too. I will take a picture of no 21 if I can this coming week and add it in later… watch this space.